Among Ichikawa’s Contributions Was Development of the Snare for Polypectomy 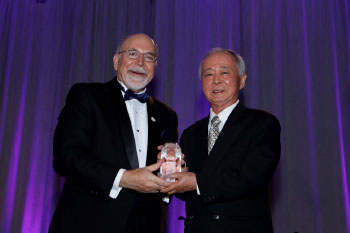 Olympus visionary Hiroshi Ichikawa (right) received the first-ever Industry Service Award from the American Society for Gastrointestinal Endoscopy (ASGE) at the 2019 Crystal Awards Ceremony held at the U.S. Grant Hotel in San Diego on Sunday, May 19, presented by ASGE President Steven A. Edmundowicz, MD, FASGE (left). The award recognizes Mr. Ichikawa’s work with leading U.S. endoscopists and the ASGE to support and advance endoscopy education and the development of new endoscopic technologies during his 38 years with Olympus America.

CENTER VALLEY, Pa., (June 20, 2019) – Olympus, a global technology leader in designing and delivering innovative solutions for medical and surgical procedures, among other core businesses, announced today that Olympus visionary Hiroshi Ichikawa received the first-ever Industry Service Award from the American Society for Gastrointestinal Endoscopy (ASGE). The award recognizes Mr. Ichikawa’s work with leading U.S. endoscopists and the ASGE to support and advance endoscopy education and the development of new endoscopic technologies during his 38 years with Olympus America. Mr. Ichikawa accepted the Industry Service Award at the 2019 Crystal Awards Ceremony held at the US Grant Hotel in San Diego on Sunday, May 19, during the Digestive Disease Week (DDW). This first for the ASGE Crystal Awards in the category of industry recognition coincided with the 50th year anniversary of DDW, a leading conference among gastroenterologists worldwide.

One of Mr. Ichikawa's major accomplishments at Olympus America was developing endoscopic polypectomy devices and technology at the request of New York surgeon Dr. Hiromi Shinya whose dream was to develop a less invasive surgical procedure to remove colon polyps. Though many regarded the new endoscopic procedure as very risky at the time, Dr. Shinya and Mr. Ichikawa pursued testing, and in 1970, they introduced polypectomy technology to the worldwide endoscopy community. Since then it has become standard endoscopic practice.

“Hiroshi’s humility belied the fact that he was instrumental in developing snare polypectomy, the single most important development in GI endoscopy as it was the innovation that launched all aspects of therapeutic endoscopy,” said Gregory Ginsberg, MD, FASGE, Director of Endoscopic Services and Professor of Medicine at Penn Medicine, who received the Rudolf V. Schindler Award in recognition of his accomplishments in endoscopic research, teaching, and/or service at the 2019 ASGE Crystal Awards Ceremony.

Mr. Ichikawa came to Olympus America in 1968 to help promote the use of flexible gastrocameras and early fiberoptic endoscopes in the U.S. market. During these early years, he established his lifelong practice of visiting GI units throughout the country to exchange ideas with endoscopists for new products and to identify unmet clinical needs. Mr. Ichikawa worked with Olympus Tokyo to introduce numerous new endoscopic products to the U.S. market, including a number of new colonoscopes, upper GI endoscopes, and duodenoscopes for ERCP.

“I am so grateful to my colleagues and friends for helping me to passionately develop innovative endoscopic technologies and services for the benefit of patients, physicians, nurses, and their related communities,” said Mr. Ichikawa, who retired from Olympus in 2007 after a 43-year career with the company. “I would like to share this exciting award with all of my Olympus colleagues, as none of my accomplishments would have been possible without their hard work and support.”

In 1985 Mr. Ichikawa was selected to head the endoscope division of Olympus America. In 1989 he was assigned to manage Olympus' manufacturing plant in Albuquerque, NM, as well as its repair service plant in San Jose, CA. In 1996 he returned to New York to manage Olympus’ Marketing and R&D groups in Olympus' North American corporate headquarters.

He also continued working as a member of the Olympus international team for worldwide endoscopic technical innovation and business. In this work he reported to Mr. Ichizo Kawahara, the well-known head of Olympus Tokyo's Medical Division. When Olympus America’s headquarters relocated from New York to Pennsylvania, Mr. Ichikawa continued his work in the R&D and Marketing groups.

Prior to retiring, he served as Vice President of Customer Relations, working with leading U.S. endoscopists and the ASGE to support and advance endoscopy education and the development of new endoscopic technologies.

Dr. Ginsberg added, “Hiroshi set a bar for customer relations that Olympus has always strived to maintain and sustain.”

About Olympus Medical Systems Group
Olympus is a global technology leader, crafting innovative optical and digital solutions in medical technologies; life sciences; industrial solutions; and cameras and audio products. Throughout our 100-year history, Olympus has focused on being true to society and making people’s lives healthier, safer and more fulfilling.